But there are ways to create a custom issue hierarchy.

You can add issue types above Epics if you upgrade to Jira Cloud Premium.

But try to add a Task to a Story and you’ll quickly run into problems.

The Problem With Sub-Tasks

The problem with Sub-Tasks is you can’t add them to Sprints like you can with Stories, Tasks, Bugs and other base layer issue types.

This means you lose access to a range of built-in reports to help you manage your projects. This might not be a deal breaker for some teams. Many teams can get away without batching their work into sprints.

But not using sprints means you miss out on a range of useful reports. Jira provides Burndown Charts, Burnup Charts, Sprint Reports, Velocity Charts, Version Reports and more. Most of these reports use sprints for data.

If you want to take advantage of all the progress reports Jira has to offer, sprints are essential.

What if you use sprints but just add higher level Stories to your sprints instead of lower level Sub-Tasks? This is an option for some teams. You’ll be able to use all Jira’s built-in reporting options.

This can work well if your Stories are small and only contain 2-3 Sub-tasks.

But it won’t work for every team.

What if your Stories are extremely large? Say your Story contains 30 Sub-Tasks each with their own estimates. You may not be able to fit it into a single sprint at all.

Even if you could, Jira’s built in reports would become far less useful.

Rather than being updated whenever a Sub-Task is resolved, the report would only be updated when the entire Story is complete.

This will make your reports extremely patchy. It will appear no progress has been made for days then suddenly a large chunk of the project will appear to be done.

Why You Shouldn’t Use Epics As Stories

What if you use Jira Cloud Premium and create levels above Epics? Under this approach, your hierarchy would look more like Feature Epic Story.

With this issue hierarchy everything is moved up a level. What once would’ve been a Story is now an Epic and what would’ve been an Epic is now a Feature.

With Stories as the lowest level issue type all your work can be added to sprints. You regain the use of Jira’s built-in reports and can track your project accurately.

One drawback is you have to pay $10 per user for Jira Cloud Premium. This can be a very steep price to pay to use a more comprehensive issue hierarchy.

But another issue is you can’t add Epics to sprints.

Said another way, you MUST break down every Epic into Stories. But since they’re now the middle level, you’ll run into situations where some Epics don’t need to be broken down further.

This is incredibly incovenient.

This gives you the flexibility to add some Stories directly to sprints. Or break down your Stories further into a number of Tasks and add those to sprints.

With this approach don’t need to:

This can work for many teams without an external add-on.

How To Add A Task To A Story In Jira

The Epic Story Task hierarchy sounds great, but how do you add a Task to a Story?

You can use issue links to link a Task to a Story natively in Jira. But the problem is Jira doesn’t know you’re trying to create a hierarchy.

If you’re willing to use an external add-on, we created Agile Docs to help with this.

In Agile Docs you’ll be able to create a completely custom issue hierarchy. Not only can you create levels above Epics but also levels below Stories.

It makes it easy to create an Epic Story Task Sub-task hierarchy by allowing you to easily link Tasks to Stories or any issue to any other issue in a parent-child relationship.

For example, to add a Task to a Story in a parent-child relationship, use the “Agile Docs Parent” issue link to specify the Story is a “parent of” the Task.

With this method you retain the use of Jira’s built-in reports.

And you get a handy tree view of your Jira issue hierarchy.

How To Configure An Epic Feature Story Hierarchy In Jira

The Epic Story Task hierarchy is just one variation of many hierarchies you can configure by creating levels below Epics in Agile Docs.

Another useful structure is the Epic Feature Story hierarchy. Under this hierarchy, Features attach to Epics using the “Epic Link” field instead of Stories. And Stories attach to Features using the “Agile Docs Parent” issue link.

It functions almost exactly the same as the Epic Story Task hierarchy but some users prefer using Stories as a lower level issue type.

The variations are endless with Agile Docs.

Try Out The Epic Story Task Hierarchy for Your Next Project

The Epic Story Task (or Epic Story Task Sub-Task) hierarchy is an underrated way to structure your projects in Jira. You gain the ability to add issues over 2 different levels to Sprints and retain the use of Jira’s built-in reports.

How to Export Issues To Excel In Jira

Tree View Options For Jira in 2021


Visualise any project, release or cross project filter in a tree with rolled up estimate progress reports 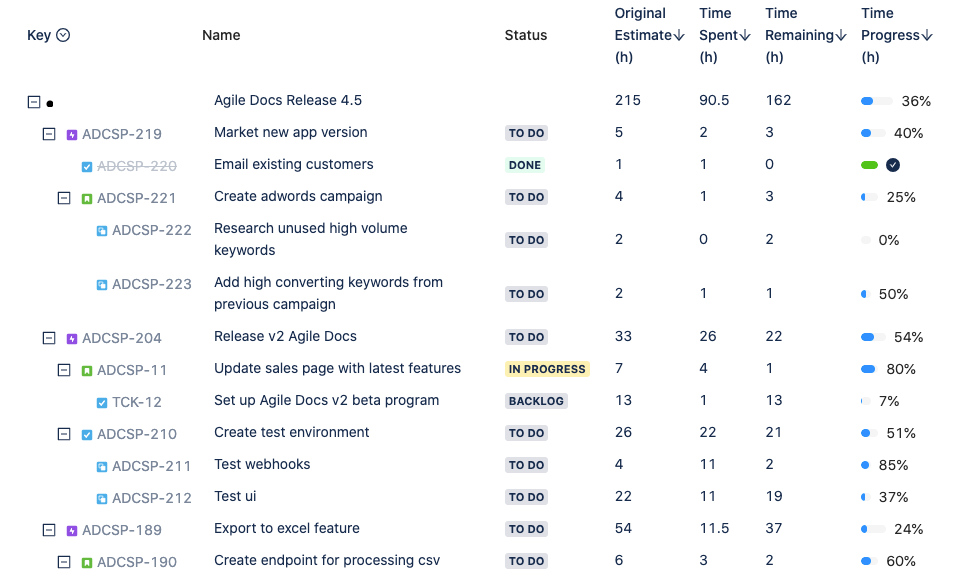